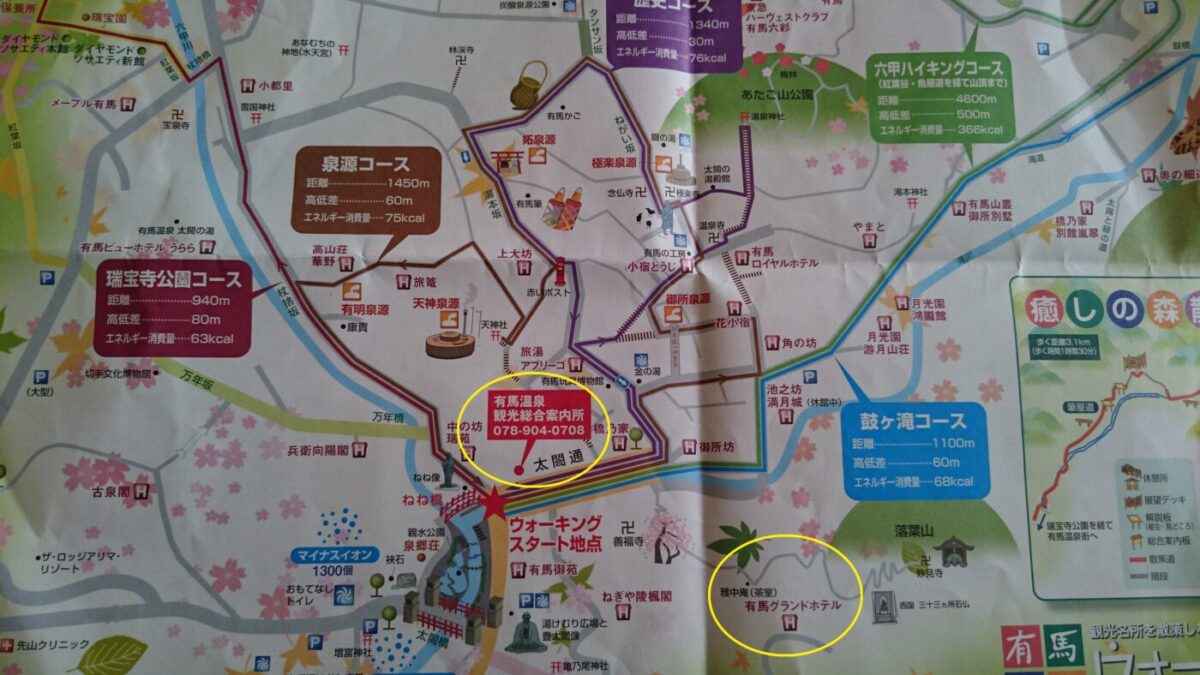 Since I am not good at English, this article converted Japanese with Google translation. I am not fluent in English, and please be pardoned though there may be mistakes. It would be greatly appreciated if you could use it as a reference for foreigners visiting Japan.

In the summer of last year, the elementary school student’s daughter and his wife went out and it was very good that this time we used the Arima Grand Hotel’s day trip plan with 4 family members including the eldest daughter of junior high school students. Speaking of Arima Grand Hotel, Arima is a well-established luxury hotel.

We will purchase the in-house common ticket at the hotel reception desk in the 2F lobby. The restaurant can be booked in advance, but this time it was awaiting cancellation, so we had to go to the hotel and make a reservation directly at the restaurant. I decided to use Chinese food “Kaen”.

By the way, the cash voucher called this common hall ticket can be used not only for meals but also for souvenir purchase.

Arima Grand Hotel went out by car because it is located in less than an hour from our house. Arrived at Arima Onsen running in the Rokko Mountains. The hotel was on the west side of Arima hot spring town.

For Arima Grand Hotel parking lot, hotel use is free. Because it is so big, I think that it is available even on holiday use. For those who come by train or bus, there is a shuttle bus and service is very good.

For those who caught a cold parking lot, hot air blowers were prepared at the entrance of the hotel. Certainly, the temperature on the ground was about 6 ° C, but Arima was 3 ° C so it was pretty cold.

It was a lobby which was given a gorgeous decoration like an old-fashioned hotel, which is like an image used by the business community when entering the hotel.

As I was waiting for the cancellation, I went to the restaurant of Chinese restaurant “Kaen” directly at 10:00 on the day, and it seemed that the vacancy appeared just right, so I was able to make a reservation at 11:30.

Because I had idle time of an hour and a half until the appointment time, I decided to go to downtown area of ​​Arima Onsen.

Although it is not so far even if walking to Arima hot spring town, we decided to use the hotel bus because it was a bit cold. The bus is big enough to ride about 20 people in the minibus and you can send it from Arima Grand Hotel according to the time of train and bus.

Of course, you can send it to the park in the wild boar (Arima Grand Hotel affiliate) near the base of the stroll in the city and the tourist information.

By the way, this map can be taken at the Arima Onsen Tourist Information Office.

For the time being, from now on, I crossed the Nenbashi, and the daughter of elementary school student came down to the river which came to the river which caught in the river last summer. Although I intended to enjoy for a while, because it was cold, unlike summer I rounded up early and headed for Konoyu.

Konoyu, a super famous place, kept waiting as long as expected, as expected.

I think that I am waiting 20 to 30 minutes. It is too famous, so it may be better for you to take a break on weekdays to enter this hot spring.

The footbath is also full, I still want to enjoy slowly on week days.

As I went further upwards, every shop was full in the shopping street, especially Minchikatsu – croquette was a long line. It was about 11 o’clock, but probably about 30 people were lined up.

I saw the explanation of the fountain source on the guide plate of Uwanari source and climbed further.

A while before I was introduced Arima Onsen at NHK ‘s Bra Tamori, I heard that the eldest sister sensor responded to the hot spring source, and I found a shop that was introduced in Blatamori.

A sweet scent drifts slightly when entering inside.

Misumori Brewery shop says that carbonic crackers were invented, and it seems that there was a directive of the second son of the cram school Ogata Kan to appear in history textbooks for development. I feel history. There was a place where we had a hand-baked shop in the shop, one by one when we passed by the side.

Next I went to a hot spring source that carbonated water springs up. It is close to Mitomori.

It seems that a hot spring containing carbonic acid is sprinkling back from the entrance.

You can drink that hot spring water. It was myself that challenged first. You can feel slightly carbonated tongue with tongue in the taste of iron.

Clearly, pretty bad! If you drink, you’d better avoid it for a moment. It seems that in the past you put sugar in this water and was drinking as a cider.

As the mealtime approached, I went to Arima Grand Hotel. My wife said that Boo Boo, but walking without taking a shuttle bus to reduce hungry.

By the way, if you take a shuttle bus of Arima Grand Hotel, it is about 1 minute from Kobe Electric Railway “Arima Onsen” station. Arima ‘s wait is filled with cars in the GW and autumn excursion seasons, so it may be faster to walk.

Lunch at Arima Grand Hotel over the price

It is a place where I am a little out of hunger and I am waiting for lunch. In Kaen, me and my wife picked sweet and sour pork in Kobe pork of your choice, the second daughter chose the mayonnaise sauce of your choice of shrimp, and the eldest daughter chose senior lunch.

This is sweet and sour pork.

There are a lot of senior lunches in small increments

Although sweet and sour pigs were slightly vinegar, rich sauce caught in Kobe pork and it was delicious. The prawn mayonnaise sauce seems to have been very delicious. Because there is quite a volume, even adults will be full of stomachs. This is cheap 2,000 yen. However, although it is a set with hot springs.

After lunch you can see the streets of Arima again

We took a shuttle bus at Arima Grand Hotel to the parking lot of Shunsai Inano, a Japanese restaurant near Arima Onsen Tourist Information Office, aiming for Tenjin Onsen.

First of all, as you climb up the slope, you can see the Onsenji, opened by the rows that distinguish the area.

A little more, this time it is Gokurakuji. This seems to be the foundation of Prince Shotoku.

Nearby there is Gokuraku Sengen which sent hot water to Kinsen that Hideyoshi Toyotomi used favorably.

As we go further, Ginnoyu has appeared, but here too I could have a queue.

It took about 15 minutes to arrive.

Upon arrival at Tenjin-Sengen, the uncle of hiking was talking about prickly.

Talking with the story, NHK’s explanation at Bratamori, I was listening to his wife and his wife while thinking that he was doing at Tenjin-Sengen.

There is Tenjinsan, a god of student here, so I visited once and came back.

After going down to the city and watching the souvenir, I called the hotel and asked for a shuttle bus, and after returning from the spa town to the Arima Grand Hotel, it was soaked in the hot spring.

The end of a day trip is a hot spring

There is no photograph of the hot spring, but there is a brown bathtub containing the same gold as the gold spring and a bathtub that is transparent, but it seems to contain salt, there were also outdoor baths respectively. I warmed my body slowly cold for about 30 minutes. The outside was pretty cold.

The garden of Arima Grand Hotel was also holding ice.

Although Arima Onsen has few images of day trips, Arima Grand Hotel has a day plan. Although my house used plans with meals and hot springs, there seems to be plans for those who want to relax in the rooms. If you are unsatisfied with Hotel Life alone, it is very convenient because you can take a walk around the city with a shuttle bus. Why do not you try tasting the service of a well-established hotel at a reasonable price?

This weekend was a weekend charge, which was about 14,600 yen for 4 people.

Where shall I go next time ~ ?